An Interview with Jeff and Sheila Lipinsky 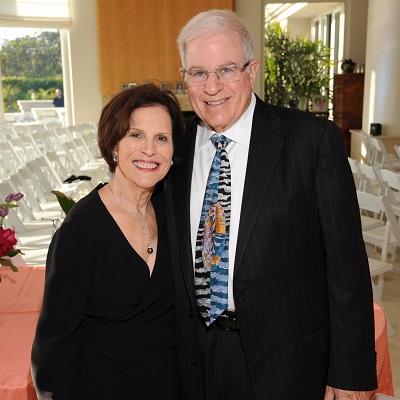 If You Can, You Give Back: A Conversation with Jeff and Sheila Lipinsky

The Lipinsky Family San Diego Jewish Arts Festival could not be possible without the generosity of the family whose name the festival bears. For nearly half a century, Bernard and Dorris Lipinsky’s names were synonymous with philanthropy in San Diego. Through their generous support of organizations ranging from the Seacrest Village Retirement Homes to the Lipinsky Institute for Judaic Studies at San Diego State University, the Lipinsky family is an indispensable pillar of the Jewish community. In 2001, Bernard Lipinsky took a leap of faith and underwrote the festival, allowing it to grow into one of the most successful Jewish cultural and artistic events in the country. Although Bernard passed away the following year, his legacy of generosity and community service continue to be perpetuated by his daughter Elaine (1943-2011), his son Jeff, and his daughter-in-law Sheila.

From their home in San Diego in March, 2018, Jeff and Sheila shared their reflections on Bernard Lipinsky’s life, the history of the Jewish Arts Festival, and their family’s legacy.

On growing up with a commitment to service…

Jeff: My father was born in New York in 1914. He had two brothers and two sisters. My grandmother came out to visit some cousins in San Diego, came back to my grandfather and said, “I'm moving to San Diego with the kids, it would be nice if you would come.” And my grandfather learned something that took me a few years to learn: when your wife asks, you say “yes, dear."

Sheila: Bernard was six years old when the family came to San Diego in 1920.

Jeff: He got his start as a milkman, but he and his brother had quite the entrepreneurial spirit. He got into the jewelry business, the vending machines up in Camp Pendelton, and eventually the mortgage business.

Sheila: Jeffrey’s mother, Jane, passed away when Jeff was ten and Elaine was eight. Bernard and Dorris met through Jane’s mother. She was great at fixing people up.

Jeff: My father was a very loving, kind person. He was a workaholic because he had to be, but he was very family oriented. He was very active in Jewish causes. I think that runs in our blood. In fact, of the 16 that started the Hebrew Home and Jewish Family Service, five of those were his two sisters, his mother, and two cousins.  My parents always taught me that if you can, you give back. We try to follow in their footsteps.

Sheila: I grew up with the same type of values, although my my parents did not have the same resources. My father was the president of the board of the Hebrew Home, what is now Seacrest Village.  My mother was very involved in helping a family that came over from Europe after the war.  That's how I really got a taste of what it felt like to give back.

On an unexpected set up…

Sheila: You want to know how I met Jeff? I was at UCLA and I was dating somebody that my father wasn't particularly pleased with. At the same time, Jeff went into his family’s mortgage business, and my dad was his first investor. And he met Jeff, he shook his hand, and he liked him right away. My dad let Jeff’s cousin know that I was in San Diego for the summer and I wasn’t doing a thing.

Jeff: Since I had dated most of the girls in San Diego, I was looking for some new blood.
Sheila: So Jeff called me. And I thought, “OK in order to pacify my parents, I'll go and have coffee with him.”

Jeff: She always listened to her father, fortunately for me. She's the best thing that ever happened to me. I never thought twice about that.

Sheila: And here we are, two kids and four grandkids later. We’ll be married 50 years in July.

On the birth of the Festival…

Jeff: We started coming to the REP in the very beginning.

Sheila: We’re talking in the early days when it was on Sixth Avenue in the church!

Jeff: We've always had a warm spot in our heart for the way Sam took on projects that were not popular; stories that needed to be told. We thought that was very important.

Sheila: We helped to introduce Bernard, Dorris, and Elaine to the REP. When Todd had this idea of starting the Jewish Arts Festival, he made a date with Jeff's dad and met him at the Meridian and talked to him about perhaps helping to start this program.

Jeff: And dad thought it was a great idea and he always like to seize the opportunity to do things he felt were important.

Sheila: Anyway, it started out very small. The first year was just one day. But people showed up.

Jeff: Looking back, I'm sure neither of them considered that it was going to get this popular and be this successful. And that's because of Todd.

Sheila: As Jeff's father would say, I wrote the check, but Todd did the rest. He thought the world of Todd, as do we.

On the past 25 years of the Festival…

Jeff: Looking back on the past 25 years of the festival, there have been so many highlights.

Sheila: We have a special place in our hearts for The Mad Dancers which our son, Steve, performed in. But with every part of the Festival, there is such a heimishe feel that has been there from the very beginning. People are just happy to be there.

Sheila: It's like that feeling when you walk into a synagogue anywhere in the world. You feel that connection.

On the Lipinsky legacy…

Jeff: When I look back on the work that my family has done, I want people to know that you don't have to be real religious to support Jewish values and to keep Judaism growing. It's very important to support Jewish organizations, to be honest in what you do, and to put your money where your heart is. To do all you can to help your fellow man.

Sheila: You know, I think I think honesty and integrity and commitment make this a better community and a better world to live in. Fortunately, our kids also feel the same way. They are extremely proud of their grandparents, both sets, and they too have those values of giving back.  When I talk about giving back, it's not just the money, it's giving of ourselves. Let’s face it, money comes and goes. It's about who you are, what you value, and what you are able to do. That is our story.