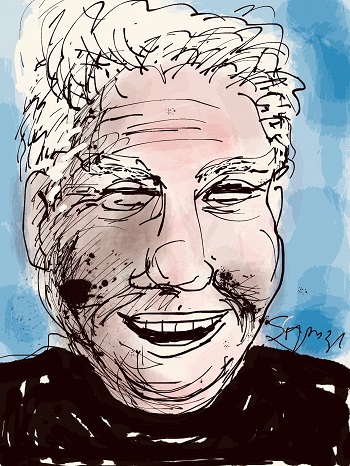 Thoughts, conversations and looking ahead from Artistic Director, Sam Woodhouse


SO CLOSE, AND YET SO FAR AWAY…


… is a colloquial saying that describes one view of the relationship between the US and Mexico. I first heard this phrase many decades ago when speaking with a playwright in Mexico City.


When we are not in quarantine times, the Tijuana border is the most active border crossing in the Americas. San Diego REP is a just a quick 20 minutes from that border. Ever since my mother used to drive to TJ in the early 1960’s with me in tow to get her hair done, mine cut and to buy bolillos (crusty rolls), Mexico has always felt close to me.

In 1988, I had a “better late than never” epiphany. Looking around carefully at my San Diego community and listening to the rising voices of Latino artists in California and Tijuana, I founded Teatro sin Fronteras (TSF) , which means Theatre without Borders. TSF sponsored the mainstage production of Latino plays and Latino/a writers and began a 32 year commitment to regularly represent the Latino/a voice on our stages. Our 20–21 season will feature the 56th and 57th produced mainstage Latinx plays in REP history. There are less than a handful of theatres in America with a comparable record of Latinx production.

We have primarily produced major Latinx writers from the US, including: Lynne Alvarez, María Irene Fornés, Josefina López, Rick Najera, Culture Clash, Octavio Solis, Bernardo Solano, Latin’s Anonymous, Caridad Svich, Luis Alfaro, Karen Zacarias, Luis Valdez and our current Playwright-in-Residence Herbert Siguenza. We have also shared work by artists from the south of us, including Ariel Dorfman and Antonio Skármeta from Chile, Emilio Carballido from Veracruz and Bostich and his Nortec Collective from Tijuana.

Of course there is no “one voice” of Latinidad. The subjects and themes of over 50 Latinx works at San Diego REP offer a wonderfully diverse range that include: a reimagining of a Greek classic in East LA, a Quinceañera staged in the Lyceum by a gangster on the run from the FBI, a comedy inspired by Moliere set in Early California, a tragic love story from the streets of El Paso, Pablo Neruda teaching his postman how to romance his girl with poetry, a thriller about the secret trial of a corrupt government torturer from Chile, and a loving ode to the Yaqui tribe of Sonora, Mexico.

Our production of I Don’t Have to Show you No Stinking Badges in 1988 launched TSF and began a multi-year relationship with Luis Valdez. We have produced six plays by Valdez, the father of Chicano theatre. Since then, most of our seasons feature at least one Latinx play. Last season included Bad Hombres, Good Wives by Herbert Siguenza. Next season has two: 57 Chevy by Cris Franco, starring Ric Salinas of Culture Clash and Mother Road by Octavio Solis. And, in September, we will produce our fourth annual Latinx New Play Festival.

The voices of Latinx writers are so close and also so important to who we are at San Diego REP as we make theatre for the people of Southern California.

The march towards discovery and representation joyfully continues.

Portrait of Sam above created by Herbert Siguenza